October 26, 2015 – A few photos of Community Advisory Board members at our Women’s Expo booth this weekend.  What a great event! 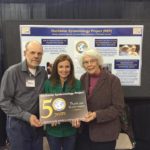 Diverticulitis on the Rise in U.S. Since 2000

ROCHESTER, Minn. – Low-risk cancers that do not have any symptoms and presumably will not cause problems in the future […]

Compared with the general population, diastolic dysfunction developed more rapidly in patients with rheumatoid arthritis during a 5-year period,…

Hysterectomy May Indicate Cardiovascular Risk in Women Under Age 50

ROCHESTER, Minn. – Hysterectomy may be a marker of early cardiovascular risk and disease,…

Using the REP, researchers find what the risk factors are for long-term opioid use.

One in 4 People Prescribed Opioids Progressed to Longer-Term Prescriptions

Rochester Post Bulletin wrote an article about opioid use and long-term effects.

Opioid painkillers are the third-most prescribed drug in Olmsted County, according to the Rochester Epidemiology Project.

Steroid use in rheumatoid arthritis is started earlier in treatment than it was 20 years ago.

Steroid Use in RA More Common

More patients with rheumatoid arthritis today are initiating treatment with glucocorticoids early in the course of disease than was the case 20 years ago, a retrospective study found.

Is it Dementia, or just normal aging?  A new tool developed using the REP may help patients find out.

Is it Dementia, or Just Normal Aging?  New Tool May Help Triage

Ronald Peterson, M.D., Ph.D., a Mayo Clinic neurologist, discusses new scoring system to help determine which elderly people may be at a higher…

Vitamin D toxicity rare in people who take supplements, researchers report
Over the last decade, numerous studies have shown that many Americans have low vitamin D levels and as a result, vitamin D supplement use has climbed in recent years. Vitamin D has been shown to boost bone health and it may play a role in preventing diabetes, cancer, cardiovascular disease and other illnesses. In light of the increased use of vitamin D supplements, researchers set out to learn more about the health of those with high vitamin D levels. They found that toxic levels are actually rare.
MedicalXpress
Original Abstract: Mayo Clinic Proceedings

Some earlier research hinted that Ritalin and Adderall can hamper a child’s growth.  But a study of adults who took the drugs as kids now suggests any such effect is…

(Reuters Health) – In a new study of people over age 85, those who said they engaged in things like painting, quilting or book clubs during middle age were less…

Midlife arts, crafts and socializing tied to better late-life cognition
A study using the Rochester Epidemiology Project found that among cognitively healthy people 85 to 89 who were followed for four years, engaging in significant social activity in mid- and late life drove down the risk of developing mild cognitive impairment by 55 percent. Engaging in craft projects in mid- to late life drove the risk of such intellectual decline down 45 percent.
Article: Reuters

The incidence of ischemic colitis has increased in recent decades and is most common in older patients with multiple comorbidities, according to findings from a retrospective population-based cohort and nested case-control study.
Healio
Original Abstract: Clinical Gastroenterology and Hepatology

Framingham May Fall Short in Newly Diagnosed PsA
A standard algorithm for identifying patients at risk for an adverse cardiac event underestimated the risk for patients newly diagnosed with psoriatic arthritis (PsA), according to researchers.
Medpage Today
Original Abstract: Arthritis Care and Research